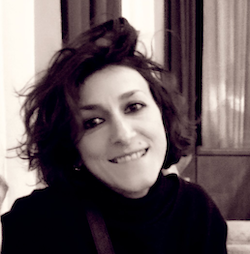 Antonella Paladino obtained her M. Sc. in Pharmaceutical Chemistry (2005) at the University of Naples “Federico II”. After receiving her Ph.D. in 2011 in Computational Biology as a joint program between the University of Naples and the Molecular Modeling and Bioinformatics lab at the IRB of Barcelona under the supervision of profs G. Colonna and M. Orozco, focusing on computational modeling of protein dynamics and molecular recognition processes, she moved to the Computational Biophysical Chemistry dept. at the University of the Basque Country. In 2013 she was appointed as a postdoc at the Biomolecular Simulation and Computational Chemistry group of ICRM (CNR) headed by prof. Giorgio Colombo. Her research is aimed at investigating the relationship between the structure, the dynamics and the function of biomolecules through the application of several computational structural biology tools, ranging from molecular modeling, bioinformatics, cheminformatics, molecular dynamics simulations, docking and thermodynamic studies. Since 2019 she is a postdoctoral researcher of the Bioinformatics lab at BIOGEM.